We are proud to be members of these industry associations:

The Top Flat Roofing Contractor serving Brunswick, ME & Beyond

Are you interested in flat roof systems? Providing roofing contractor service for Waterville, Augusta, ME & more, D H Pinnette & Sons Inc. are prepared to handle your roofing needs. We are a licensed installer for leading manufacturers Carlisle SynTec, Firestone Building Products, and GenFlex.

EPDM, or Ethylene-Propylene-Diene-Monomer, roofing systems are the number one choice for buildings with low slopes, and have become increasingly popular in both new developments and roof restorations.  Known for their characteristic dense, synthetic rubber membrane, EPDM roofing systems have been used and trusted since the 1960’s based on their installation versatility, long lifespan and low maintenance requirements.

On a commercial scale, businesses that choose EPDM roofs traditionally do so based on their well-known waterproof properties, as well as their ability to inhibit oxidation and damage caused by UV (ultraviolet) decomposition.  This particular system is comprised of a single layer, and is not typically recommended for buildings accustomed to high foot traffic.  EPDM can be installed using a variety of effective methods, including full-adhesion, mechanical or even ballasted.  It is most commonly available in black and white color options, and has been known to last as long as 20-25 years.

White, or reflective, roofs have been in use for the past 15 years. Commonly referred to as "cool roofing," it has received a stamp of approval from the state of California, which has adopted its use in its building codes. It has become a LEED (Leadership in Energy and Environmental Design) standard of the U.S. Green Building Council, and has been mandated by government officials in Chicago, New York, Seattle and Philadelphia.

There is just one problem: The popularity of white reflective roofing, especially in colder climates, is based on sloppy science and good marketing.

From LEED, the Cool Roof Rating Council and ENERGY STAR program, all the way up to the U.S. Department of Energy, there is widespread belief that white reflective roofing systems, even on buildings in northern cities like New York and Chicago, are more efficient and more cost-effective than dark roofing, and that these systems also reduce global warming and the "heat island effect," in which dark-colored building materials raise the ambient temperature in urban areas by a few degrees in summer.

This passionate allegiance is based largely on studies done at the California-based Lawrence Berkeley Laboratories in the late 1990s and early 2000s that purportedly showed the efficacy of using white reflective roofing anywhere, including northern climates. But the studies did not take into account thermal performance, air infiltration or vapor drive. They only measured surface temperature at the roof level.

Echoed by those with vested interest only in reflective materials, these studies gave momentum to the white roof movement. But new studies are beginning to question the performance of reflective membranes as a panacea for energy savings and challenge the hypothesis on which standards and codes have been based. Architects, engineers, building owners and roof system designers, who were not consulted during the Lawrence Berkeley studies, are now questioning their scientific validity.

Without due diligence, it's no surprise that cool roofs have begun to experience problems. A study done at Stanford University shows that white roofs may actually increase, not decrease, the earth's temperature. White roof membranes have high reflectivity that directs heat upward into the atmosphere and then mixes with black and brown soot particles, which are thought to contribute to global warming.

The Stanford study takes advantage of the latest advances in atmospheric computer modeling. The report references previous studies that found white roofs increased average space heating use more than they decreased average air conditioning use in northern climates. Since owners have to spend more money heating their buildings with a white roof, they must consume more natural resources, thus increasing global warming.

On a practical level, white roofs in colder climates are more prone to developing condensation, which leads to lower wind resistance, lower insulation values and the formation of mold. Similar to how water condenses on the outside of a glass of ice water on a warm day, condensation can build up on the underside of a reflective roof due to the temperature difference between the warm underside and cooler topside. This problem is especially likely for under-insulated cool roofs in cooler climates.

A cooler surface also makes it more likely for stagnant water to accumulate on white roofs. When not drained properly, membrane soiling, loss of reflectivity and algae growth are likely on reflective roofs. The Superdome in New Orleans, which features a reflective roof, requires regular cleanings at a price tag of nearly $100,000 in order to maintain a clean, reflective surface and inhibit mold and mildew accumulation.

Snow and ice can also build up on white roofs, which can damage roof components and pose dangers to workers on the roof and people below.
And white roofs don't have anywhere near the long-term ultra-violet and natural weathering resistance of non-reinforced black EPDM and are not easily repaired at the end of their service life.

The U.S. Green Building Council, Cool Roof Rating Council, legislative bodies and the U.S. Department of Energy are encouraged to reevaluate their stance on reflective roofing. Energy-efficient roofing is a complicated issue, and no one material holds all the answers.

White reflective roofing certainly has its place, which is primarily in southern climates. But as a green solution in northern states, it's just not that cool.

TPO, or Thermoplastic polyolefin, roofing membrane is white. It is particularly popular in southern states where its reflective properties reduce energy costs for companies. When companies are able to consume less gas or electricity to cool their buildings, their operations have a reduced environmental impact. 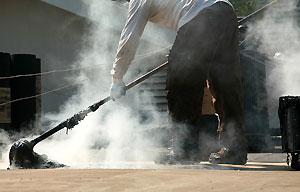 Tried and true, the Built-Up roofing system has been in use for well over a century and is still going strong.  This long-standing favorite among both roofers and building managers utilizes layered redundancy and unmatched tensile strength, allowing it to survive even the harshest weather and climates.  From a cost/value perspective, it continues to prove itself as one of the best all-around values in commercial roofing applications.

Built-Up roofing systems are comprised of multiple layers of an asphalt and fiberglass mixture, and installed in overlapping (redundant) layers.  This makes it suitable for high-traffic roofs, while minimizing the costs associated with maintenance and repair.  While it possesses many desirable qualities, it is famed for its unyielding strength, long-lasting durability and natural insulating properties.  This unique mix of attributes has given it a reputation for providing years of protection against leaks and punctures.   For those concerned with safeguarding their property at the highest level, a single-ply layer of Modified Bitumen can be added to synergize your roof’s protective properties.

For buildings which regularly encounter foot traffic, Modified Bitumen remains one of the industry’s most popular and time-tested roofing systems.  It is frequently used as a supplement to Built-Up roofing systems, on account of its lightweight properties and unique dual-layered application style.  Modified Bitumen unites a combination of materials known for their superior protection properties, including asphalt polymers, polyesters and plastic forming compounds.  Together, they form an air-tight seal that has become known for its ability to safeguard against leaks, cracks, moisture, and sun-related damage.

Among its most impressive qualities is Modified Bitumen’s trademark reflective coating.  Not only does this make it a preferred cap sheet for Built-Up roofs, it also helps control cooling costs while enhancing the roof’s lifespan and all-around integrity.  In addition, it provides a great deal of much-needed flexibility during flashings.  Finally, Modified Bitumen roofing gives you the flexibility to choose between both smooth and granulated applications.